After the spawning process, fertilized blue catfish eggs usually hatch in six to ten days depending on water temperature. Optimal temperatures for egg growth range between 25 to 27 degrees Cel-sius, while temperatures below 21 degrees tend to damage eggs and promote fungal growth, re-sulting in weak fry. Once hatched, blue catfish remain in the fry stage until they completely absorb their yolk sacs, a process that is also dependent on water temperature and usually takes between 3 to 6 days. Although the exact habits of blue catfish hatchlings are unknown in the wild, in hatch-eries the fry have been observed swimming in schools for several weeks before dispersing; how-ever, this may occur for a shorter time in the wild. Blue catfish become sexually mature between the ages of 4 to 7 years; at this time, they are generally 35 to 66 cm (14 to 26 in) long and weigh 2.3 kg. During the first few years of development, blue catfish grow slowly; however, this rate typi-cally increases with their size as they age. Growth rates vary from river to river depending on the population density and available food. In the James River, they can grow up to 3 pounds in the first 8 years, while in 11 years, they can reach 20 pounds.

Both male and female blue catfish are necessary in order for reproduction to take place. Blue cat-fish spawn monogamously, mating with only one partner per yearly reproductive cycle. Mating in-cludes many chemical interactions between males and females. Males build nests and attract fe-males using species-specific pheromones before they swim together in various patterns.

Learn more about this catfish species.

Spawning and breeding season occurs once a year, between April and June in freshwater reser-voirs and backwaters depending on geographic location. Their general behavior and semantics of reproduction share similarities with the entire Bullhead family, especially with channel catfish. Re-production begins with the foundation and creation of a nest in a suitable place by a male. They use a vigorous sweeping motion with their tails to clear debris and use their jaws to remove larger objects; their nests can range from 6 to 14 inches in diameter. Attraction between male and fe-male catfish occurs with the use of pheromonal cues. Catfish often perform various courtship swimming patterns and even mild biting in the nest before fertilization. Patterns include rubbing their belly and barbels on the female’s face. Reproduction proceeds from courtship behavior to fe-male catfish depositing roughly 40 eggs at a time that adhere to the nest. For every kilogram of body weight, females lay 4,000 to 8,000 eggs, a gradual process that may take several hours. During egg dispersal, male catfish fertilize the eggs with their sperm, which is dispersed in the form of milt upon and near the eggs. Upon completing egg fertilization, male catfish chase the fe-male away and guard, organize, and periodically ventilate eggs with their tails. Once the young blue catfish hatch, they are believed to form schools before becoming independent. Until then, fry remain in close proximity to their nest, which is guarded by the male. 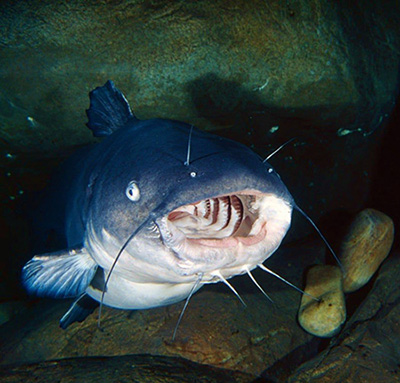 Although the male is the primary caretaker, both male and female blue catfish care for their fry. They seek low current areas with protective structures to better secure their eggs and rear their fry. In addition, they seek sturdy and stable surfaces to which their sticky eggs can properly ad-here. Once eggs are fertilized, male catfish force females away from the nest to organize and pro-tect the eggs. Males remain within the nest after eggs hatch to guard and direct the fry, leaving only when the fry completely absorb their yolk sacs. 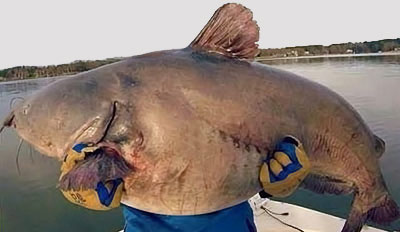 Blue catfish commonly rest during the day near the bottom of deep, restrictive waters. During the night, they swim to swifter, faster flowing waters, to find food. Blue catfish also exhibit migratory behaviors and adjust to temperature changes within their habitats by swimming to warmer waters during the winter and cooler waters during the summer. They often travel upstream during the re-productive seasons and tend to move back downstream towards estuaries after the mating sea-son. The feeding nature of blue catfish is very opportunistic and can result in cannibalism. Catfish employ pecking orders to communicate fitness levels with other members of the same species. These behaviors include biting, slamming into each other, and highly energetic swimming.

Blue catfish have a well-developed system for communication based on the release of chemical pheromones and sensory organs. Their communication systems are developed enough that social systems such as pecking orders have been observed. Hormonal pheromones also play a key role in reproduction and mating systems between blue catfish. In the wild, hybrids between channel catfish, a similar species, and blue catfish are very rare. This is most likely because each catfish species releases species-specific pheromones. Blue catfish have the ability to taste their sur-roundings with sensory tissues on their barbels and certain areas on their skin; they utilize these sensory devices to search for food. Instead of relying heavily on their eyesight, they use their bar-bels and olfactory senses to identify their surroundings. 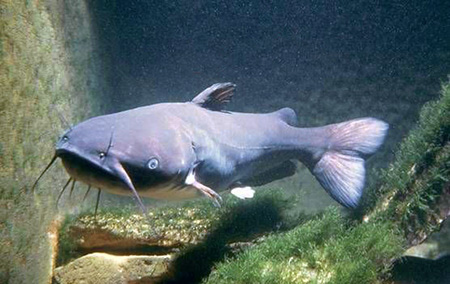 The diet of a blue catfish periodically changes throughout its development, expanding from small invertebrates to a larger variety of fish, worms, clams, small crustaceans, mussels, crabs, insects and even frogs, as they age. Blue catfish are opportunistic feeders that search for food primarily with the use of sensory tissues on their barbels and skin. These taste buds enable blue catfish to taste the surrounding environment before they actually eat anything. Fry are very small and are easily preyed upon by other fish, so they feed nocturnally at low depths and near cover on zoo-plankton and aquatic insects. As they grow in size and age, their diet expands to include a variety of smaller fish, even their own species.

Sea and shorebirds, such as double-crested cormorants, willets, brown pelicans, and osprey, hunt small fish, including blue catfish. Catfish are actually preferred by bald eagles over other fish species. To avoid predation, blue catfish defend themselves with a serrated spinal barb located on both their dorsal and pectoral fins. The spines have glands positioned at their base that can expel toxins; they make their way into predators’ wounds and cause sharp pain.

Blue catfish serve as predators and prey, providing food and selective pressure for the organisms that share their habitat. They also feed on many other fish, creating pressure and limiting the growth of these species. Blue catfish are an excellent food source for avian predators of the Chesapeake region and are also food sources for otters, and predatory fish like flathead catfish. As adults, blue catfish serve as a food source for humans and birds. Many blue catfish grow to tremendous sizes; this in combination with their feeding style has lead to the belief that they ex-hibit adverse effects on other fish communities. Their vast diet enables them to eat endangered fish like shads and herrings, causing these species to suffer a decrease in population size. Intro-duced in several rivers, blue catfish have overcome the salinity barrier that was originally thought to prevent them from expanding in other rivers. The abundance of blue catfish has caused compe-tition with and reduced populations of white catfish in Virginia and Maryland. Bacteria including Aeromonas hydrophila, Flavobacterium columnare, and Edwardsiella ictaluri also impact cat-fish health. If a catfish is infected by Aeromonas hydrophila, they develop ulcers and their fins red-den and begin to fray. Flavobacterium columnare causes catfish to develop infected white spots around their mouths, fins, and scales, and degenerates their fins. Edwardsiella ictaluri causes white lesions on their backs and sides to form, and external hemorrhages under their bodies and around their mouths. 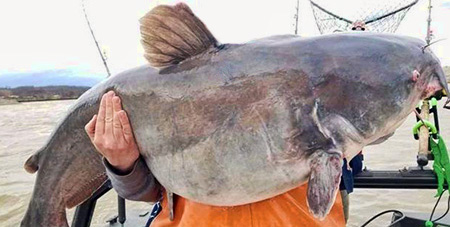 Blue catfish populations generate important economic benefits in both recreational and commer-cial fishing. In the many of the nation’s major rivers, blue catfish can grow to large sizes, so recre-ational fishers often travel to locations in hopes of catching them. This popularity has led to a prof-itable business in guided fishing tours. Their abundance and firm tasty flesh make them a source of profit for several inland fisheries. Blue catfish account for one third of the total recreational fish-ing efforts in some areas, offering a market gain for environmental agencies and fisheries alike. In some areas, commercial catches of blue catfish have seen an unfortunate and dramatic increase.. Not only are blue catfish used as sport fishes, they are also an important food source for more than sixteen states. They provide adequate economic success and good sport fishing for many people.

The increased population growth and dominance of blue catfish has triggered declines in other aquatic organisms. Declines in the populations of white catfish, shads, and herrings were most no-table upon the introduction of blue catfish in states like Maryland, Ohio, and Virginia. Due to the rapid decline of these organisms, blue catfish have gained recognition as a detriment to their own ecosystem. 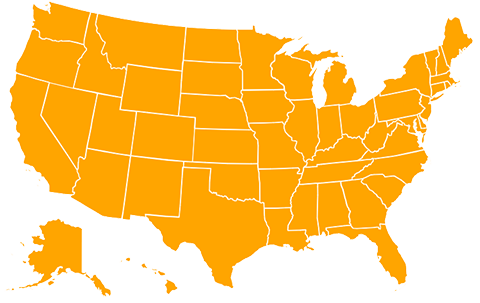 Search the ACA database and find catfish species in any state in the U.S.