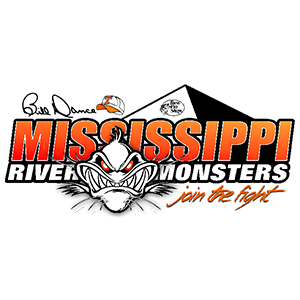 Along the mighty Mississippi, in the shadow of the iconic Bass Pro Shops Pyramid, hundreds of anglers from around the country will gather to compete for the title of the MISSISSIPPI RIVER MONSTER Champion.

Taking place September 15th through the 18th 2021, The 6TH MISSISSIPPI RIVER MONSTERS EVENT will again host hundreds of anglers that will compete for thousands of dollars in cash and prizes!  Registered anglers will have a chance to enter the daily BIG FISH pre-fish events on the 15th and 16th for a chance to win some great cash and product prizes!

On Friday the 17th, the fun begins with a host of seminars taking place at the Bass Pro Shops pyramid along with great deals from a host of vendors.  The Captain's Meeting this year will be announced at a later date based on Convid-19 restrictions.

On Saturday the 18th, it is on!  From 7am to 3pm anglers will make their way on to the Mississippi with the weigh-in event starting immediately following where all sorts of prizes will be handed out and a new MRM Champion will be announced and awarded.

And those in the crowd make sure you're there because we're going to have some great prizes for you too!

Register early!  This year MRM is limiting entries to 100 teams.

This tournament ended on